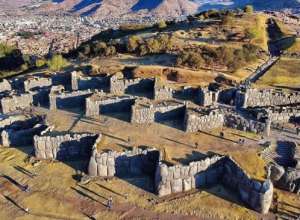 The Sacsayhuaman fortress The Sacsayhuaman Archaeological Park is located 3 km north of the city of Cusco (Qosqo), on the top of a mountain, it covers approximately 3,000 hectares, in which there is a rich Andean fauna and flora, highlighting the presence of llamas, kestrels and hawks.

Peru and Cusco rich in archeology, continue to offer us new discoveries and recent research (2009) have valued new findings in this area.

Cyclopean masterpiece of Inca architecture. Impressive megalithic ruins, located on top of a hill that dominates the north of the city. Historians of the Spanish conquest attributed military purposes to it, which later went on to become religious, and finally a workplace. The walls are made up of huge stone blocks that reach up to 9 m. high, 5 m. wide and 4 m. thick, the largest is estimated to have a weight of 125 tons; the visitor will wonder how they could have been brought there. The junction of the huge rocks were perfectly assembled without any use of mortar. The main wall is made up of three successive zigzag walls, the second and the third superimposed on the first. The platforms have an average of 360 m. long and are communicated by stairs and access doors.

The Inca's throne is surrounded by rocks in front of the bastions that dominate the esplanade and the "rolling", located on the same plateau. Sacsayhuaman was the scene of important historical events, especially during the Spanish conquest. Every year on the main esplanade the evocation of the Inti Raymi is celebrated. It is located 3 km from the Plaza de Armas in the city of Cusco, and can be reached on a walk, or accessed by the Cusco - Pisac highway.

Near Sacsayhuaman you can visit the archaeological site of Qenqo, you can also find different tourist restaurants, Cusco boutique hotel, recreational centers very close to Sacsayhuaman. You can also observe Andean animals in the area, a good place to spend with the family.